Home Neversnag Guardhooks THE GUARDHOOK STORY
4   
Neversnag Guardhooks The Guardhook Story
NO SNAGGING ALLOWED
Both of my Gramps invented so I figured I should try it. Grampa Bill was also a great fisherman so besides trying to invent just about anything from soup to nuts he invented what he called FISHGETTERS.
For years he made and sold FISHGETTERS of all sorts and actually made a little money at it in his “retirement”. Once he invented a knot that I swear was the simplest and strongest knot ever. He taught me how to tie it and I use it religiously. But his FISHGETTER lures were out of this world. He claims to have invented the first double snelled perch rigs ever to be fished in the bay of Green Bay. I remember catching many a double perch on a single line – what a tug. He taught me how to stream trout fish and I learned how to get snagged every other cast but also caught some nice Brookies. He invented a trout spinner made with a single hook that had a solid shank so you could easily remove the hook from the trouts mouth – the lure with a kind of handle on it for easy removal. He made all sorts of FISHGETTERS in all sorts of colors and sizes for so many different fish. For me – I just wanted to fish, fish, fish, but GRAMPS had the patients to invent FISHGETTERS and to fish. But I often got snagged on weeds and stumps and brush and said there has got to be a FISHGETTER that won’t get snagged.
So I started to tinker too- it must have been in my blood. I knew I could not snag any of Gramps FISHGETTERS or any of the other lures in my old tangled up tackle box if I took off the hooks but I also knew I could not catch fish without fish hooks. So the fish hook was the problem. The thought occurred ” So I could OUT DO GRAMP if I could come up with a SNAGFREE fish hook”. Well I tried all sorts of hook guards made with plastic and metal but nothing seemed just right. Then one day I found a broken ink pen in a drawer and a ink pen coil spring and put it on that trout spinner of Gramps with the spring twisted onto the single hook shank. I found a solder gun to fix it there and golly the spring seemed to SPRING away just about everything, yet it was so soft a fish might be able to bite thru it.
Then came the test. I took my ten year old son out fishing for bluegills in a lake full of sticks and stumps and bluegills. He always seemed to get snagged. I tied on my “new” stump proof spinner for him, and told him for every snag he got I would PAY HIM ONE DOLLAR. He licked his chops thinking he was going to get rich because he knew he was really good at snagging. Well not that day. He caught many bluegills but never once got snagged. He actually got angry cause he couldn’t make any money at the snagging game. But he really did get hooked on this new Spring Hook that easily caught fish. Then I showed him something ……..Nick would you believe when you finish fishing you can put that Stump Proof FISHGETTER in your pocket? I took off the lure from the line and then slipped the end of the spring over the hook tip so it covered it like a safety pin and then put that whole FISHGETTER in my pants pocket. He looked at me like “Dad, are you crazy?” I saw the look and let him do it and he said WOWHOOK. I said the GUARDHOOK. They Only Catch Fish. I better Patent this. And Nick – heres a dollar for your patience today. Nick was my first Field Tester but since then Guardhooks have been tested by tens of thousands of bass, pike, Muskie, walleye, and pan fishermen who believe in NO SNAGGING ALLOWED and love to brag about their NO TANGLE TACKLE.
Ted Rydell – Inventor of the Guardhook

PS- GRAMPA died the year I filed for the patent on the Guardhook. He was a spry 89 and winked at me when he fished the Guardhook that same year for the first time. 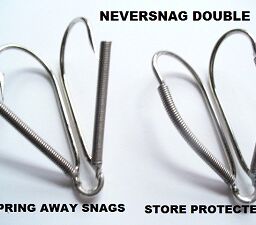 Adjust-a-Guard Positions Safety Lockout as TANGLE-GUARD To Lock it for your pocket, grab free end of spring, flex, and pop…